We are Safety4Sisters, a Manchester-based group that works to secure protection, safety and support for migrant women who are survivors of domestic abuse and gender-based violence. The project was born out of the peer-led Women Asylum Seekers Together (WAST), after recognising the need for specialist support for women with no recourse to public funds and who disclosed gendered violence. As a group, we commit to working in ways that are grounded in feminist and anti-racist praxis.

Our report, based on a pilot project that incorporated weekly group-work and casework, highlights work undertaken with 61 women who had precarious immigration status.

We sought to identify and record the numerous barriers faced by those experiencing gender-based violence, which included: destitution, refused space at women’s refuge, fear of police due to immigration status, lack of interpreting provision, threat of deportation and criminalisation, isolation from support networks, insufficient evidence for formal mechanisms such as the DDV concession, lack of counselling, and mental health deterioration. More than recording though, we also wanted to develop models of effective practice that supported women to live safe and free from violence. 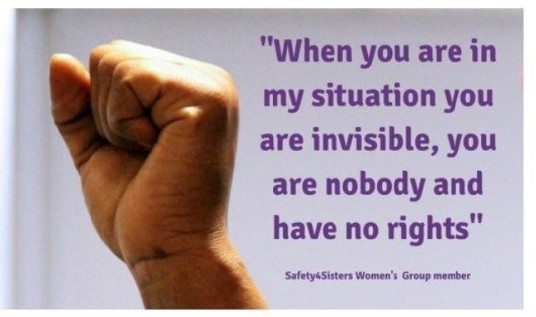 At Safety4Sisters, we know that this work relies on advocates to support individuals subject to intimate and structural violence in their claims for justice, but moreover that a strong and committed voice from the VAWG and migrant’s rights sectors are imperative to overhaul the systemic inequalities that migrant women experience. In our direct project work and in our campaigning, we seek to centre the voices of those who are often made invisible by a hostile environment and who are silenced by gendered violence.

Our groupwork provides a space for migrant women, and their children, to come together to share their experiences and support one another around the dual violence that they face; the abuse perpetrated by their partner, family, or wider community, and the harms experienced as women subject to immigration control. It is also a space for warmth, laughter, learning, solidarity and companionship.

In our campaigning work, we recognise the importance of working in partnership with others to effect long-lasting change. On March 8th, we will join Women for Refugee Women and 20 other organisations, at the Houses of Parliament for the ‘All Woman Count’ lobby. We will stand in solidarity – and share our stories – to demand safety, dignity and liberty for migrant women.

Hot on the heels of this, we will host a conference on the 16th March in Manchester, to celebrate International Women’s Day. Alongside Southall Black Sisters and Latin American Women’s Rights Service, we will be asking what does justice look like for migrant women and how do we achieve it? The event will highlight excellent work undertaken nationally to support those with no recourse, promote campaigns such as Step Up Migrant Women, stand in solidarity with those demanding a Domestic Violence bill that empowers survivors and safeguards specialist provision, and – crucially – centre the voices of migrant women.

Join us, in person and on social media by following the hashtag #IWDJustice2018.